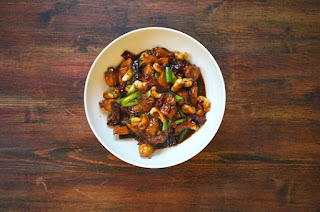 Marinate the chicken cubes for about 20 minutes.

Mix together all the sauce ingredients until well combined.

Add about 1 Tbsp of peanut oil in a wok over medium heat. Toss in the cashew and stir until golden brown in color. Remove the cashew from the wok and set it aside.

Turn up the heat on high and add about 2 Tbsp of peanut in the same wok. Mix 2 tsp of peanut oil into the marinated chicken (this will help to separate the meat during stir-frying), and into the wok. Stir-fry the chicken for about 5 to 6 minutes, or until cooked. Dish out and set aside.

Mix in the remaining oil into the same wok. Then toss in the dried chilies and ground Sichuan peppercorns, and give it a quick stir. Then add the ginger and garlic and stir-fry until fragrant.

Then add the chicken, stir, and the prepared sauce. Close with a lid and bring it to a boil. Remove the lid, and give it a good stir, and add the scallions and stir again, then add toasted cashew nuts. Serve immediately with some steamed rice.