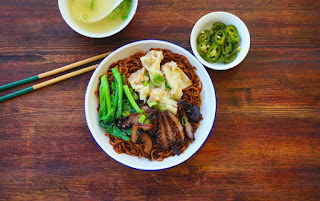 Marinate the pork with sugar, garlic, dark soy sauce, light soy sauce, & a big pinch of pepper for about 5 hours or overnight in the refrigerator.
Method

Preheat the oven to 400˚F. Let the pork come to a room temperature. Place the pork on the rack of a roasting pan. Roast the pork for about 20 minutes. Turn over the pork, add about 4 to 5 Tbsp of water in the pan. Roast for another 20 minutes.

Remove the meat from the oven and let cool slightly before serving.