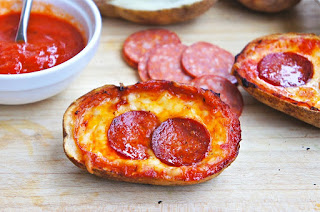 Cut each potato in half and scoop out the flesh and leaving about ¼ inch of the potato skin.   Brush the potato inside out with olive oil and season with sea salt. Then bake in the oven for about 8 to 10 minutes on each side until they are crisp. Remove from the oven and let cool.

Fill about 2 Tbsp of pasta or pizza sauce, top-up with mozzarella cheese, (as much as you like), freshly ground black pepper and pepperoni.   Place the potato skins on a baking sheet, and bake for about 15 to 16 minutes, or until the cheese has melted. Serve warm or at room temperature.