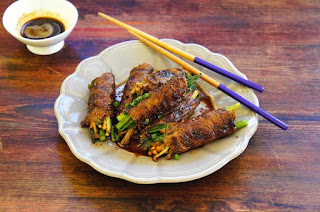 In a small bowl, mix together the soy sauce and Mirin. Set aside.

Spread the slice beef on a cutting board and top with asparagus, scallion, and Enoki mushrooms. Roll up tightly and place seam side down.

Heat a large skillet over high heat and coat with oil. Arrange the rolls with the seam side down and sear all sides, and at the same time brush the rolls with the soy and mirin. Once the rolls are cooked, splash some sake and let the alcohol evaporated and top with some Shichimi pepper. Serve warm Wasabi mixed with soy sauce, if necessary.

Makes about 9 to 10 pcs of Japanese Beef Rolls